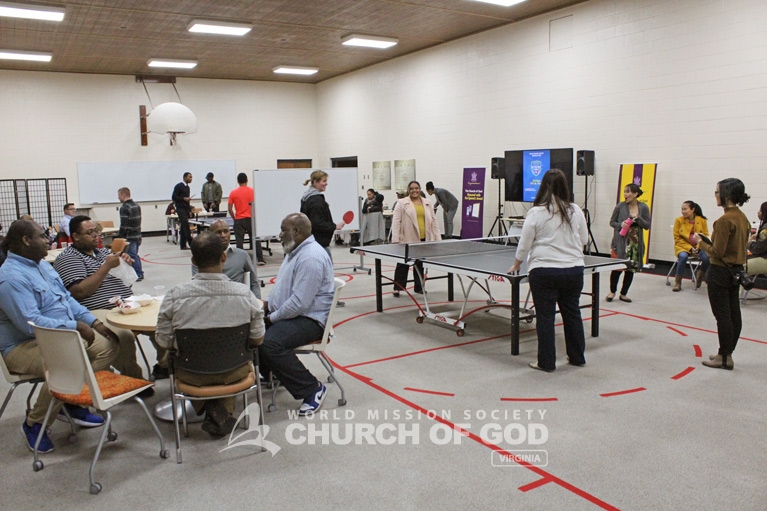 On cold days, it can be rather difficult to get motivated to play sports or to even exercise. However, an exciting ping-pong tournament hosted by the World Mission Society Church of God in Newport News gave family and friends a reason to come out of their hibernation.

The popular indoor sport, traditionally called table tennis, originated during England’s 19th century. It was commonly known as a parlor game. Furthermore, playing the game was simple; a table, paddles and a ball, and you’re good to go! It has since evolved, and is now a worldwide, competitive sport known by its trademark name, ‘ping-pong.’

The ping-pong competition took place on a Wednesday night with about 20 participants. The playing area was abuzz with lively conversations, loud cheering, and laughter. Savory game snacks like hot dogs and tasty desserts were served during the course of the night. After eating, guests jumped right back in to play another round of ping-pong.

Participants who never played before understood its fundamentals very quickly, which ultimately raised the stakes of the game. The competition quickly heated up as skills of the new players sharpened and grew more intense. Moreover, everybody enjoyed each other’s company in the mist of the family-like atmosphere. Who knew something as simple as ping-pong could bring family and friends closer together?

Besides the competition and delicious food, participants also found interest in the Bible. One guest commented on her Bible study experience, saying, “I enjoyed the Bible study because it goes according to the Bible.” After playing ping-pong, several guests delved into various topics of the Bible, such as the existence of God the Mother and the Passover.

The Church of God in Newport News, VA has been serving its local community for over two years. The Church of God hosts Bible studies and seminars that are open to the community, conducts volunteer services, and hosts family-oriented events. Take a look at our past activities.