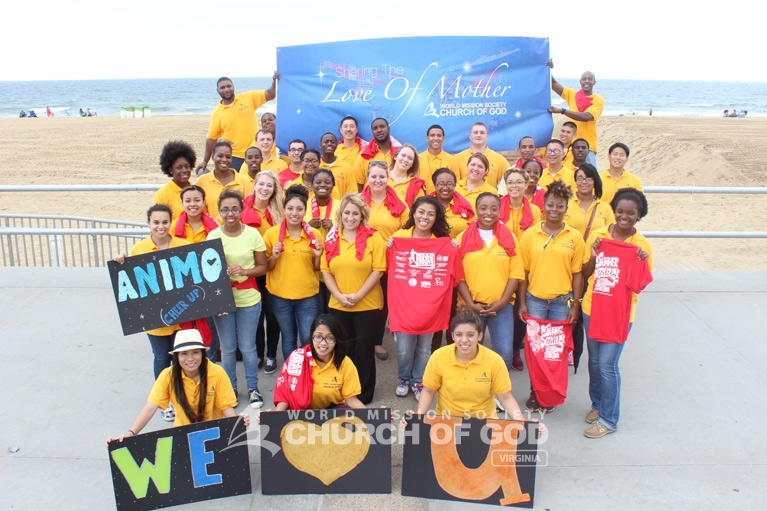 “Thank you so much for coming,” remarked one racer while running towards the finish line of the Summer Sizzler 5K Run. She was speaking to one of the many Church of God volunteers there to cheer on more than 300 racers as they ran or walked to support cancer research at St. Jude Medical Center.

The yellow-shirted volunteers arrived an hour before the race began to help set up. At the beginning of the race, volunteers donned bright smiles and chanted high-energy cheers to motivate the racers as they warmed up on the boardwalk.

“I heard you guys out here early this morning singing and shouting. You all keep up the good work,” said a passerby.

“Go! Go! You can do it! You are almost there!” Shouted volunteers while clapping and encouraging the race participants throughout the duration of the race.

“You guys are so awesome and so sweet, thank you so much,” said Rachel, who completed her first 5K during this race. Rachel was inspired to run the 5K after reuniting with her biological family whom she hadn’t seen since her childhood. She said she felt so much love and support from the Church of God volunteers.

The Church of God members’ moral support didn’t stop at the finish line; they led a frenzy of cheers during the awards ceremony too. They also helped clean and pack up after the entire event concluded.

“You guys were great! So many racers thanked me for having you all come and support us. I hope we can work with each other again in the future,” said Russ Turner, Road Rage Events CEO.

The Church of God in Virginia Beach volunteers are glad that many people were touched during the Summer Sizzler 5K Run, and hope that their actions will lead others to carry out the same type of good deeds in and around their communities.