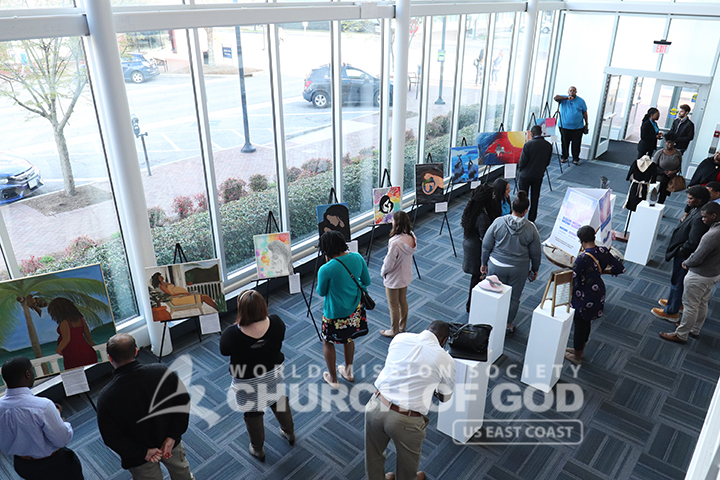 Originally held in South Korea, under the name “Our Mother,” Mother’s Love Art Gallery illustrates the infinite love and sacrifice of mothers through various pieces of art.

“Our Mother” Art Gallery was a huge hit in South Korea, bringing many to tears as they reflected on their own mothers’ indescribable love. Mother’s Love Art Gallery, which portrays a love that transcends cultural and continental boundaries, arrived on the East Coast of the United States in 2015—making its debut at the Brooklyn Marriott in New York City. Then, it moved to the Church of God’s Manhattan location off 39th street, where it remained open to the public until 2019.

Save the Earth from A to Z with Mother’s Love

The ASEZ students at Old Dominion University decided to host Mother’s Love Art Gallery on their campus to create an environment of care and love that would allow their peers and neighbors to feel and ruminate on the love of their mothers. And ultimately, understand that this love is a shadow of the love that comes from Heavenly Mother.

The university students of the Church of God formed ASEZ being inspired by Heavenly Mother’s example of unconditional love and concern for all people. Also, they passionately believe that the key to solving the world’s most obstinate challenges is the all-encompassing and selfless love of Mother. The driving force behind their SAVE movement is God the Mother’s love.

On March 24, the grand opening day of Mother’s Love Art Gallery at Old Dominion University, the ASEZ members went to the gallery’s site in the morning to make sure everything was ready for the big night. ASEZ and Church of God members submitted poems, writings, short stories, drawings and photos to convey the love of a mother.

The official grand opening commenced at 5 p.m. Community members, officials, students and faculty members streamed in as soon as the doors opened.

Upon arrival, guests viewed an introduction video about ASEZ and the motivation behind the gallery. Guests reflected on their own mothers and they couldn’t contain their emotions. Many of the guests realized that the love, hard work and sacrifice of mothers on this earth is a copy of the love that comes from our Heavenly Mother.

In total, 80 guests attended the grand opening. These also included ASEZ members’ relatives who shed tears after understanding the love and sacrifice of Mother through the artwork. Many of the students who joined the gallery’s opening signed up to study more about Mother through the Bible. And a majority of the guests expressed that they looked forward to getting to know more about ASEZ and attending future events.

A Touching Conclusion to an Emotion-Filled Week

Mother’s Love Art Gallery remained open for ten days. During this time more than 250 guests visited the gallery and experienced the love of Mother.

March 31, the gallery’s last day at Old Dominion University, was the busiest day—a constant influx of students, personnel and community members visited the gallery for the last time.

Guests were able to learn about the Passover, God’s expression of love and concern for us, and studied about it through the Bible that same night. Eighteen guests studied the Bible and 45 signed up to study in the future.

One of the guests, Law Enforcement Officer Pate, stated that she was happy to know that ASEZ existed and believes that what ASEZ is doing is very good.

In the end, numerous guests expressed that they were able to better understand the love of Heavenly Mother.

The ASEZ university students at Old Dominion University were overwhelmed and happy to see how the artwork and literary pieces brought joy and comfort to guests and helped them to understand Heavenly Mother—Who has always been in the Bible. Now, they are even more determined to channel the love of God the Mother in all their volunteer activities and in doing so bring happiness to their fellow Virginians.